PREV Ecuador: the only way is up
NEXT Video: Peru part 1 – Ain’t no mountain high enough

And so, dodging the carpet of corn kernels spread out to dry on the bridge that spans the border, we rolled on into Peru. First impressions were dominated by the sudden appearance of ‘motorised mosquitos’ – the ubiquitous mototaxis or tuk tuks of northern Peru.  These buzz along the roads in swarms, swerving through the traffic, and travelling at speeds and in conditions that are clearly well outside their design parameters.

At this point we were still planning to hotfoot it south to Huarez and the Cordillera Blanca.  So we decided to ignore the ‘tried and true’ loop via the Inca ruins at Kuelap and opt for a more direct route to Cajamarca.  Of course the ‘shorter distance’ often turns out to be the longer option and this is never more so than in Peru …

It didn’t help that a rest day in San Ignacio did little to fend off a bout of the dreaded stomach lurgy.  Although we did enjoy the unaccustomed luxury of our hotel – splashing out on a US$20 room produced such delights as monogrammed towels, fluffy pillows and bathroom with a fully functioning hot shower.

If nothing else, our route provided an interesting introduction to Peruvian life – we attracted a lot of (positive) attention, with our progress cheered on in a flurry of waves, shouts and laughter.  Groups of kids would often ‘race’ us up the hills, giggling in delight as they outpaced (on foot) the gringos on their fancy bikes.

Our final night before reaching Cajamarca was spent in the little town of Huaygayoc.  Accommodation options were less than inviting, so we resorted to the police station where they directed us to the nearby sports stadium.  Apart from a nasty moment at 5am when we thought the local brass band was about to join us in the stadium for band practice, we had a peaceful night.

In Cajamarca we settled in to a huge room in a creaky old colonial building overlooking the impressive Plaza de Armas. Peruvians seem to have a bit of a love affair with brass bands, and on our day off it was non stop parading around the Plaza. Unfortunately they only seem to know the one tune.

By now we had accepted that there wasn’t going to be a ‘quick & dirty’ route to Huarez.  We threw out the plan of being there for Ed’s 65th birthday and headed off to explore some back roads.  Actually, even the ‘main’ road in this part of Peru is a narrow dirt road where a passing vehicle is a bit of an event.  First up – a couple of days winding through rural countryside and little villages, arriving each night at a small town.

We’d come up with a cunning plan to ride the seasonal track that follows the river through the Tablachaca canyon.  I’d asked a few people locally whether the route was passable and all had nodded in agreement – possibly suggesting that they had absolutely no idea what I was talking about.

After camping overnight by the river, we made it around 6 km before things fell apart.  More accurately, the track abruptly disappeared over a 15 m cliff where a 200-300m section had collapsed into the river. Backtracking a few hundred metres we eventually found a spot where we could climb down.  It was a toss up whether to backtrack out to the main road & climb the hill up to Pallasca, or to try and forge our way through. The scales were tipped when Ed climbed down to the river for a recce and found a bike tyre track – clearly some other idiot had found themselves in the same situation and had pushed on …

It took us about three hours to negotiate our way past the ‘missing chunk of road’ section – clambering over the rocks shuttling each piece of gear as far as we could each time.  Eventually we made it to where the track used to be.  From there we managed to push/drag/manhandle the bikes along the riverbed to a makeshift bridge.  There were a few people in this area living in shanties and panning for gold along the river.  Once across the river we thought the worst was over, but the ‘track’ soon disappeared under a series of huge landslides, which meant another hour or so of ferrying gear across loose rocks – we were knackered by this point so there was a fair bit of stumbling, swearing and falling over and leaving chunks of skin behind.  Eventually we found a defined track and sped downriver to where it intersected with the road.

After the barren desolation of the canyon it was a bit of a shock to reach the road junction at Chiquicara and find a dusty outpost with numerous food stalls.  We stopped briefly to refuel and then headed off along the river to find a bushcamp

The next day was spent climbing up the valley through the narrow and precipitous Pato Canyon – the single lane road clinging to the rock wall with a dizzying plunge off into the river on the other side.  Dozens of narrow pitch black tunnels added some extra edginess to the ride, fortunately traffic was light.

Arriving in the midst of the weekly market was a perfect introduction to the hats of the Peruvian highlands. The town was overflowing with campesinos (peasant farmers) from surrounding villages – the women all dressed in their Sunday best, with layers of petticoats, a kaleidoscope of colourful shawls, dangling earrings, necklaces, glittering hair clips and outrageously tall hats … 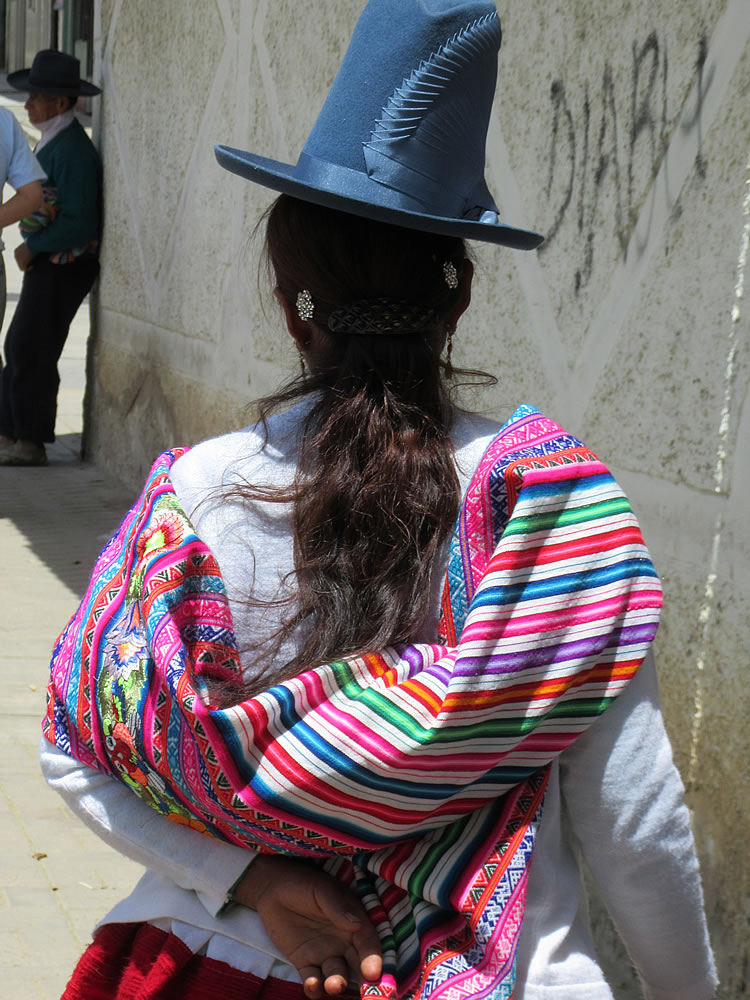 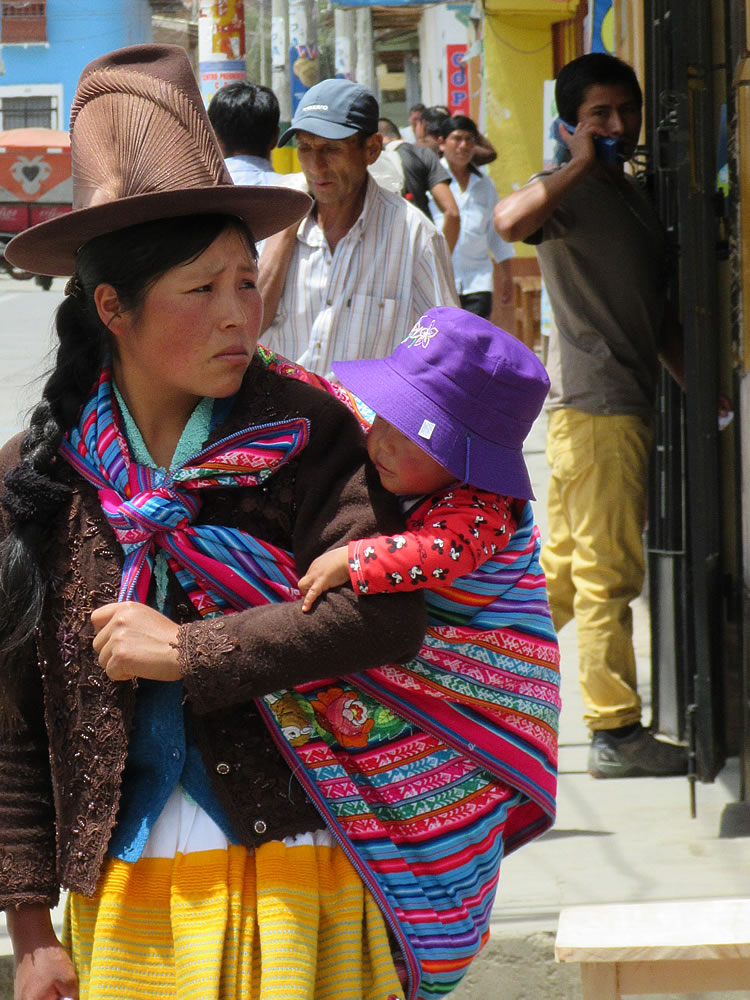 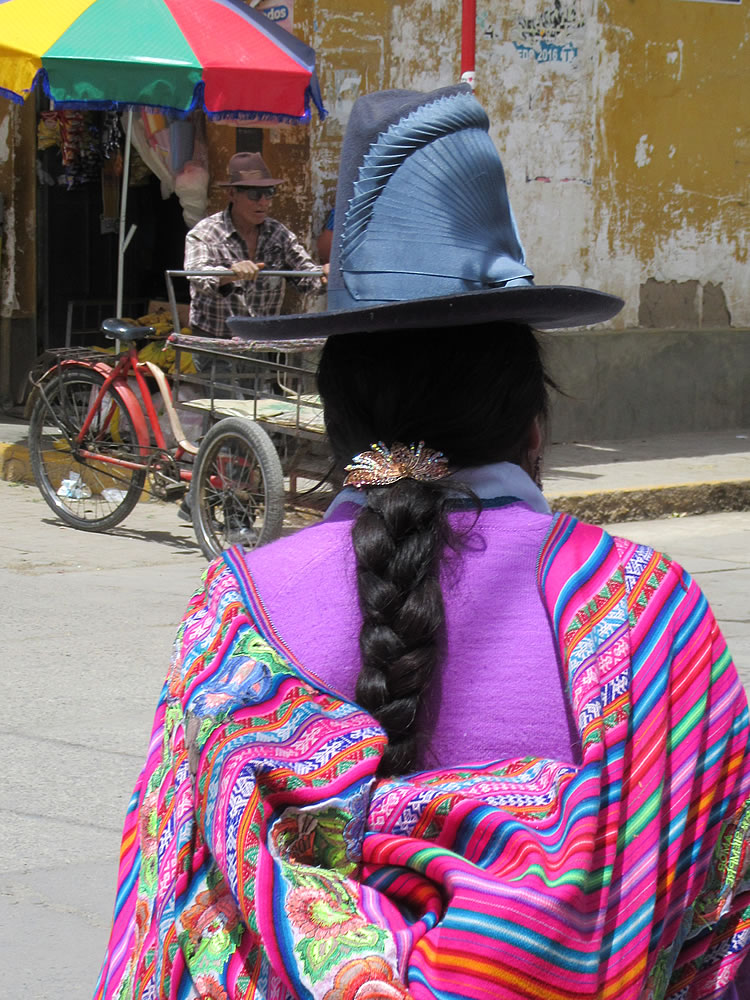 And then we headed off into the mountains – up next, the Cordillera Blanca Triple Cross …